Today marks the 500th anniversary of the start of the Protestant Reformation. Reformation Day is the day that commemorates a little known German monk, Martin Luther, who is supposed to have posted his infamous Ninety-Five Theses on a church door in Wittenberg on this date in 1517, an act that was a challenge to the Roman Catholic authority, particularly the authority of the pope, and the beginnings of the Modern World.

Many Christians in the West, particularly in the United States, identify with some branch of the Protestant Church, now considered, along with Roman Catholicism and Eastern Orthodoxy, as a branch of the larger Christian religion.

But, as we Protestants remember and celebrate the 500th anniversary of Reformation Day, along with those we honor as the Reformers, we should be reminded that although these historical figures’ actions provide us with the faith we now embrace, they were indeed flawed human beings who may not be as heroic as we imagine them to be.

For example, although historians credit Luther with starting the Protestant Reformation, and we consider his brave stance against the overreaching authority of the papacy as a hallmark of deep conviction and courage, we should not neglect the historical reality that Luther was an anti-Semite. It is true that Luther perhaps sided with the Jewish people of Europe against the Roman Catholic Church, but once they did not embrace his Christianity, he spewed all kinds of derogatory and hate-filled speech about them, referring to them as “blind” and “stupid fools”, and he equated them with the devil. 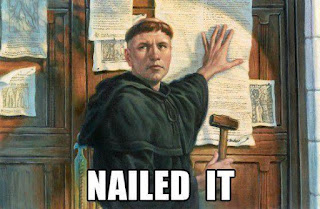 Luther also sided with the ruling authorities in their attempts to squash the peasant rebellions of the 16th century, which may have possibly been influenced by Luther’s own views about the freedom of a Christian. In his Against the Robbing and Murdering Hordes of Peasants, Luther accuses the peasants of not taking their God-ordained place with the structure of God’s planned society in which the kings ruled by divine right. Luther supported the use of brute force against these peasants, arguing that this is the only method by which they will be stopped.

John Calvin, the great father of the Reformed Tradition, was also significantly flawed. For one thing, his theological teachings, which continue to influence various Christian traditions, were centered on the sovereignty of God as some sort of capricious and arbitrary God, who Calvin argued “predestined” some for salvation and others for damnation. Calvin’s view of God leaves little to no room for human freedom and for human goodness; all of eternity has been predetermined by God.

But, perhaps Calvin’s most flawed action was his support for the death of Michael Servetus, a Spanish theologian accused of anti-trinitarianism and anti-infant baptism. Servetus had escaped to Geneva where Calvin was, and while attending a sermon being delivered by Calvin, Servetus was recognized and arrested. Calvin gave his support for Servetus to be burned at the stake as a heretic. Calvin referred to his teachings as "execrable blasphemies", and he stated that, “Whoever shall maintain that wrong is done to heretics and blasphemers in punishing them makes himself an accomplice in their crime and guilty as they are.”

John Knox, the great Scottish Reformer, whose house I walked by several times and visited on a couple of occasions, and whose statue stands in the court yard of New College, and in whose church I often sat in still reflection, was also no saint. In his, The First Blast of the Trumpet Against the Monstrous Regiment of Women, a misogynistic treatise against Mary, Queen of Scots, Knox refers to women as blind, weak, mad, and foolish, and he asks, “How can woman be the image of God, seeing (says he) she is subject to man, and has none authority, neither to teach, neither to be witness, neither to judge, much less to rule or bear empire?”

There are, of course, others among the Reformers that could serve as examples of those we often consider heroes of the Protestant faith, but who say and do things we would consider abhorrent. Moreover, we could certainly point to many atrocities performed in the name of the Christian faith by the Medieval Church before the Reformation. So, on the one hand, we can perhaps applaud the boldness and courage of the Reformers like Luther, Calvin, and Knox, whose actions changed forever western civilization and Christendom, but at the same time remember that they are severely flawed heroes.

Perhaps having this perspective will help us see our own flaws as we make Christian history for tomorrow’s believers.
Posted by C. Drew Smith, Ph.D. at 1:28 PM

Bravo, Drew. We must always remember the flawed character of human beings. Men specifically have been given authority by other men (and women), not necessarily by God. It is in their own best interests to trample on the "rights" of women as Knox and others have done. Power begets power or as Lord Acton said "Absolute power corrupts absolutely." Interpretations of God's intent for the lives of flawed humans can lead those flawed humans to flawed interpretations and to a misuse of power and misinterpretation of God's intent.