An Easter Reflection: The Resurrection as God’s Answer to Human Evil, Failure, and Despair

What does the resurrection of Jesus mean? The answers to this question are multifaceted, and no answer can fully draw out the meaning of resurrection, but a close look at the gospel stories can offer us the heart of Easter’s message.

While all four canonical gospels tell the story of the resurrection, there is something very interesting about the way the gospel of Mark describes the experience. When the women reach the tomb that Sunday morning, they meet a young man who says to them, “You are looking for Jesus of Nazareth, who was crucified. He has been raised; he is not here” (Mark 16:6).

While this seems straightforward to most readers, a look at the Greek text brings out the meaning of the Easter message. The key words in the statement are ‘crucified’ and ‘raised’. Both are in the passive voice and they are in juxtaposition to one another. A literal translation might be, “The one having been crucified has been raised.”

Since both words are in the passive voice, the subject of each word is hidden. But are they? The subjects of the participle ‘crucified’ are those who acted evilly against Jesus. But the subject of the verb ‘raised’ is God. 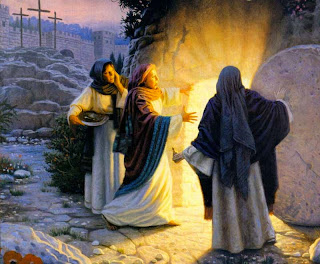 First, the story of Jesus’ resurrection shows that God’s goodness overcomes human evil. The arrest, trial and crucifixion of Jesus demonstrate the essence of human malice, as those who tried Jesus falsely convicted an innocent man of a crime he did not commit.

But those who perpetrated the evil against Jesus would not have the final say, for God was overcoming their evil act through God’s power to raise Jesus from the dead. The resurrection narrative reminds us that though evil is real and powerful, evil will never win in the end. The Easter message is God’s powerful response to human evil.

Second, the young man’s message about the empty tomb also implies that in the resurrection God’s faithfulness was prevailing over human failure. The scene of Jesus’ arrest, trial and execution is memorable for many reasons, but what is significantly shocking is the absence of Jesus’ closet followers.

The disciples had abandoned Jesus in his time of need; turning their backs on the one they called master. They had moved from being followers to failures. But in the message of the resurrection, God’s faithfulness prevailed over their failures.

The man in the tomb said to the women, “Go and tell Peter and the others that he is going ahead of you to Galilee.” While they had failed in their faithfulness, God was continuing to be faithful to God’s plan to bring good news to the world. The resurrection of Jesus is God’s continuing faithfulness to humans who fail.

Third, the resurrection story illustrates that God’s hope triumphs over human despair. The women who came to the tomb that day came to put spices not on their living Lord, but on a dead criminal. Their journey to the grave must have been filled with grief and despair. They were hopeless not only because their teacher had died, but also because all their hopes and dreams had died with him.

But the resurrection story transformed their despair into hope. They had left the other disciples in mourning, but they returned to them with joy. Easter not only gave these followers of Jesus back their master, it gave them back their hope and their purpose for living. In the resurrection the futility of human existence was defeated by God’s purpose for humanity; to proclaim loudly and boldly that God has raised Jesus from the dead.

Jesus was crucified, but he has been raised! Although a short statement, it is one that has changed the world. For in this simple but profound announcement we hear the crux of the gospel story that God’s goodness defeats human evil; that God’s faithfulness overcomes human failure; that God’s hope triumphs over human despair.

Jesus was crucified, but he has been raised!