“What Are You Looking For?”


The stories of Jesus first meeting his disciples are interesting. Although they differ slightly in the details, Matthew, Mark, and Luke narrate Jesus calling his disciples to follow him. He meets them while they are fishing and he calls them to follow him for he will make them fishers of men.

The reaction of Jesus once these two begin following him seems somewhat strange. Unlike the stories from the other three Gospels, Jesus does not say to these disciples, “Come and follow me.” Instead, he asks them, “What are you looking for?”

It seems a bit odd that Jesus, who seems inviting to the disciples in the other three Gospels, is, here in John, somewhat put off by these guys who are following him. It’s almost as if he is asking them, “What do you want with me?” “Why are you following me?”

To this question, the disciples give an odd response, “Rabbi, where are you staying?” Not only is their answer to Jesus’ question another question, but it does not in any way, at least on the surface, reveal their motives for seeking after Jesus. If anything, it almost suggests that they are stalking Jesus to the extent that they not only follow him, but they also want to know where he is staying so they can stalk him some more.

What exactly were these disciples looking for?

We can say with a great deal of certainty that John’s words to them about Jesus being “the Lamb of God who takes away the sins of the world” must have caught their attention, for it was at this point that they begin to follow Jesus. We know that Jews were looking for the Messiah who would usher in a new age in which the rule of God would overthrow the oppressive Roman power, bringing in a time of justice and peace and the restoration of Israel.

Moreover, the idea that Jesus was God’s Lamb would probably have resonated in the hearts of these disciples who were seeking forgiveness and redemption, not only for themselves, but for all of their people. And so, it is John’s words about Jesus that cause these disciples to follow Jesus.

Consider also the answer they give to Jesus’ question he put to them. Although their answer is another question, perhaps buried in that question is the real answer to what they were seeking.

“Rabbi, where are you staying?” they ask. The question implies that not only do they want to follow Jesus, but they also want to remain with him. The idea carried in their question suggests that they saw something in Jesus they had not seen in others, and they not only wanted to be associated with him, they wanted to be in intimate friendship with him.

Perhaps this is precisely why Jesus asked them what they were seeking. Maybe he was skeptical of their desires. He may have thought that since they had heard he was God’s Lamb that they might want to follow him to get what they can from him and to use him as a means to an end. Perhaps he was testing them to see if they were going to follow him to find power or something of that nature.

Maybe Jesus asked them what they were looking for just to see what was in their hearts concerning him.

And for all of us who seek to follow Jesus this is the first question we must ask ourselves. What are we looking for from Jesus? What do we want from him?

Some seek after Jesus to find wealth, thinking that the health and wealth gospel will bring them prosperity. Others seek after Jesus as a way to combat against those who are different from them. And still others believe Jesus to be their ever present and personal helper who gets them out of jams.

Jesus does not desire to be any of these to us. Rather, from what we learn from this passage and what we can gather from various stories involving Jesus and those around him, Jesus seeks to be in intimate relationship with those who choose to follow him.

Jesus certainly calls us to follow him in costly and liberating discipleship, but more than anything, he calls us to be with him in intimate relationship. 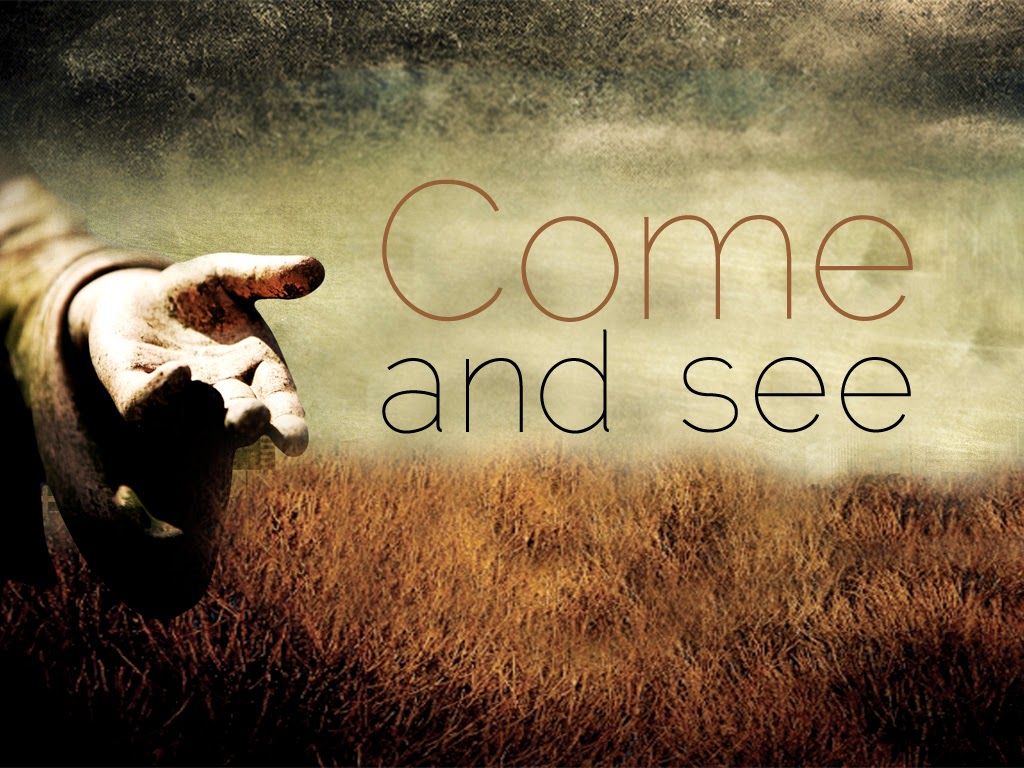 Moreover, in his response to the two disciples’ question, “Where are you staying?” Jesus invites them to “come and see.”

“Come and see” may imply that in their remaining with Jesus they will receive a revelation of him that will change their lives. They will experience a deep sense of the presence of God in Jesus as the Word made flesh. Indeed, this seems to be what happens as Andrew, one of the two who follows Jesus, goes to get his brother Simon, telling Simon that they have found the Messiah.

All of us at some point seek meaning out of life, and there are those who are consistently struggling to find a sense of meaning and worth. What are we looking for? Jesus invites us to come and see and to come and be with him to find that meaning.

(This post is a shorter version of a sermon preached on 1/19/14 at First Presbyterian Church, Monticello, Arkansas. You can listen to the audio version here.)
Posted by C. Drew Smith, Ph.D. at 4:09 PM No comments: